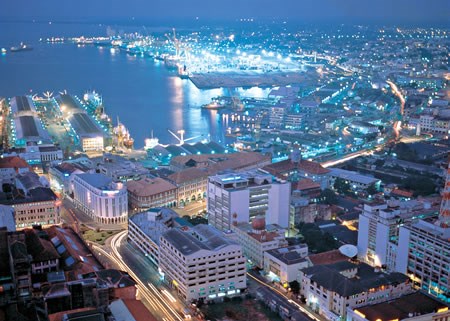 Colombo, Sri Lanka‘s bustling commercial hub, is located on the country’s west coast and with a population of between 800,000 and one million (estimates vary) is by far the country’s biggest city, as well as the most developed. Its natural harbour at the mouth of the Kelani River was a magnet for successive traders and conquerors – initially the Arab merchants, then Portuguese, Dutch and British imperialists. The city is a jarring mix of old and new, with a central cluster of high-rise office blocks and hotels overshadowing red-tiled colonial-era buildings and sprawling street markets which overflow with high-piled fruit and vegetables, colourful silks and cottons, and deliciously fragrant spices. On its crowded streets stand places of worship, symbolic of Sri Lanka‘s multiethnic heritage: graceful Buddhist viharas (temples), for instance, stand close to extravagant temples encrusted with Hindu statuary, along with Muslim mosques with minarets scattered along Colombo’s streets. Its population is swollen by some 400,000 plus commuting workers during the day and is virtually empty after nightfall. There is a lively nightlife at a number of International standard hotels, clubs, pubs and dining venues while it is limited mainly to the high end customer. During the day, Colombo’s colourful street markets, colonial-era buildings, museums and galleries, churches, mosques and temples, and the lovely Viharamahadevi Park with it beautiful trees, makes it a great place to explore on foot.

Originally named Kolomthota, Colombo was the main seaport of Kotte, the country’s 15th and 16th century capital. Known to Arab traders as Kalamba, the city attracted the rapacious Portuguese as early as 1505 and became the bastion of their rule for almost 150 years. Surprisingly little remains to attest to this era, apart from a scattering of Portuguese surnames in the telephone directory and a handful of Roman Catholic churches and seminaries depicting their architecture.

The central area of the city is still known as Fort, but the remnants of the colonial battlements have long since been demolished, or incorporated in newer buildings. There are more mementoes of the British period, including the neo-Classical old parliament building, the Victorian-era President’s House (still often called ‘Queen’s House’), and the grandly mercantile brick facade of Cargill’s, a splendid 19th-century department store that has changed little since the 19th-century heyday of Sri Lanka‘s British tea planters.